From Cover To Cover

Well, here I am waiting for the promised heavy snow to start falling, just one day after the official start of spring! It feels a bit like waiting for Armageddon so I thought it would be a good opportunity to bring my blog up to speed, especially as I'm struggling with the "dreaded lurgy" and don't feel like tackling any writing projects yet.

Last time I blogged, I was investigating the hidden (or otherwise!) costs involved in self-publishing an e-book. I'm pleased to say that it looks like I won't have to pay a graphic designer to design the cover as I think I've managed to do it myself!

I wasn't planning on sorting out the cover design yet but as I've mentioned before, I'm in the process of rebuilding my writing website http://www.melissalawrence.co.uk and I wanted an image on the home page to alert visitors to the fact that an e-book is imminent.

I started playing around with some ideas in one of my crafting graphics programmes and before I knew it, I had a cover design! Then I remembered there is a limit of 200 on how many items of one design you can sell using imported artwork and obviously I hope I'll be selling more, so I had to start all over again.

I also spent ages testing the design out as a "thumbnail" image as that is how it will appear in the Kindle Store on Amazon and comparing it with loads of other covers. In the end, I opted for emphasising a large, bold title that showed up reasonably well in the thumbnail size and didn't worry too much about my name not being very clear.

I still might need to change it as I think there is a limit on how many characters Amazon will let you use for the title and sub-title. However, that aside, I'm quite pleased with what I've produced so far but any comments or suggestions on the "prototype" below would be greatly appreciated. I've deliberately put up a small image as that is roughly the size it will be on the screen. 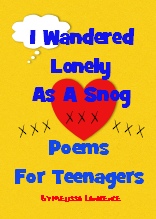 Posted by Melissa Lawrence at 14:27