Happy National Limerick Day 2017! And sincere apologies that I didn't quite manage to "up my game" in terms of blogging as I said I would do in my last post which was way back in November. But "onwards and upwards" as they say.

National Limerick Day is celebrated annually on May 12th every year in recognition of the birthday of the poet, author, illustrator and artist Edward Lear who was born in 1812. His Danish father apparently ended up in debtors prison so Lear had to start earning a living at a very young age. He began as an illustrator for the London Zoological Society and then went to live on the estate of the Earl of Derby. It was there that he wrote his first book of poems A Book of Nonsense which was intended for the grandchildren of the Derbys. 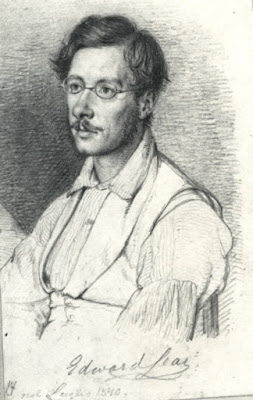 Although Lear went on to write many travel books, he subsequently became most famous for his humorous light verse including such well-known poems as The Owl and the Pussy Cat and The Dong with the Luminous Nose. He is also credited with being the creator of the form and meter of the limerick as we now know it.

I must admit to having rather a soft spot for the limerick and I have always enjoyed writing them. Maybe it was because one of my first ever writing competition successes was when I won First Prize in the Leicester Limerick Competition run by my local evening paper the Leicester Mercury, way back in 1981.

This was my winning limerick and the prize was £20 which felt like a small fortune in those days.

There was a young lady from Leicester,
Who worked as a steam-roller tester.
One day she fell out
And gave such a great shout,
For she found that the job quite depressed her.

Many years later in 2008, I was fortunate to have some limericks accepted for publication in The Mammoth Book of Limericks edited by Glyn Rees and published by Robinson. I've just looked on ebay and it's there for under £3.00. A bargain in my opinion! 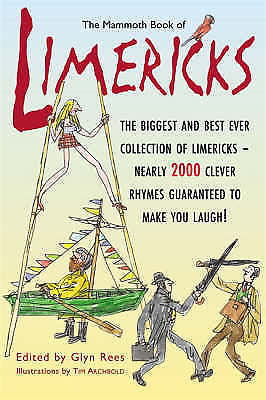 Here is one of my limericks from the book.

There was an old writer called Reuel,
Whom everyone thought was a fool;
Till he wrote some huge novels
About hobbits in hovels,
And now he's a literary jewel.

And here is one of my limericks that so far hasn't been published.

One thing that they say about food,
It's supposed to get one "in the mood".
Oysters won't do it
And neither would suet
But chocolate could get me quite crude!

If you would like to find out more about limericks and try your hand at writing them, there is a useful post here which should give you some tips and prompts:

All the above limericks are Copyright Melissa Lawrence 2017.

Posted by Melissa Lawrence at 07:56 No comments: