This is slightly spooky! I've been meaning to start posting on this blog again for a while now but hadn't quite managed to get round to it until today. I've just looked back to see when I last posted and it is almost exactly one year to the day. I certainly had no idea that this was the case and it does feel a bit like Groundhog Day or rather Groundhog Year as I could quite easily begin this post in exactly the same way as I did twelve months ago. "I hope you had a good Bank Holiday weekend. It was a bit of a wash-out here so I hope it was better where you are."

But that would be rather lazy of me and besides, it wasn't so much a wash-out as more of a severe tropical storm with lots of thunder and lightning which was indeed very, very frightening, especially when you foolishly haven't renewed your home insurance.

It was interesting looking back, as it always is, to see where I was at with my writing 12 months ago today. According to my post, I was putting the finishing touches to the website I had set up to publicise the book I was (and still am) working on called My Dear Elsie. This is based on a collection of old letters I found in my late mother's wardrobe which have a very strong connection to the popular TV series Downton Abbey.

If you are interested in finding out more about the letters and the book, this is the link to the website:

It would be great to be able to say that 12 months on, the website has done its job and that the book has been taken up by a top literary agent and is about to be published, netting me an advance of a six figure sum. Sadly that isn't quite the case. Despite having had the website up and running for a year now which resulted in some useful publicity via my local radio station, an offer to put the book on a CD which for various reasons I couldn't take up and an unexpected email from Lady Carnarvon, I don't seem to be any closer to getting a book deal than I was 12 months ago.

However, as you will see from the blog posts I've been putting on the website for My Dear Elsie, I certainly haven't given up on the project and I'm using this "pre-offer" time to crack on with typing up and researching the letters which is definitely helping me to maintain my enthusiasm for it.

It was also interesting to see where I was at in other areas of my life 12 months ago, too. Apparently I had just set myself up as a freelance designer as part of my "portfolio career". Well, 12 months later, I have even more strands in my portfolio as I'm now a designer, crafter, writer and musical entertainer which might go some way to explaining why I'm not quite so far along in my various writing projects as I'd like to be.

I'm definitely planning to blog here more than once a year from now on so I will try and hold myself to that. Hopefully by the time I'm posting this time next year, we'll all be millionaires or at least able to afford home insurance. 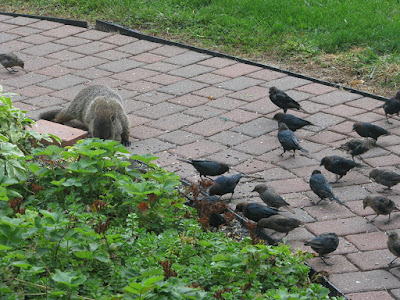 A groundhog and some starlings harvesting seeds
(http://www.publicdomainpictures.net/)
Posted by Melissa Lawrence at 19:15 No comments: