So Wimbledon has finished but I still have the Ashes and the Tour de France to distract me from writing so all is not lost. And it's a bit cooler (sorry if you love the summer!) although horribly humid at times. But then it is the middle of July so I suppose that's understandable.

It's been a bit of a tricky time for me on the writing front since my last post and not just for the afore mentioned reasons. I heard back from the agent who had asked to see all the sample copy relating to my proposed non-fiction book Dear Elsie, based on letters I inherited from my grandmother and which has a strong link to Downton Abbey. She asked to see the rest of the book which would have been great except that I haven't written it yet. My understanding is that with non-fiction books (unlike novels) you don't write the whole book until you get a contract with a publisher so it was a bit of a surprise.

Anyway, I plucked up courage to ring her again to explain the situation which was not a problem apparently and she was clearly interested in the material. However, what did appear to be a problem was my sample copy which she absolutely slated. It felt like the equivalent of someone taking a huge red pen and writing negative comments all over it. There wasn't one positive remark in her critique and although I agreed with some of her analysis and tried very hard not to be defensive, it was a painful experience.

Of course, it's not the first time I've had my writing "mauled" by an editor or agent and if I manage to keep going, it probably won't be the last. However, for some reason I found this particular experience much harder to take than any other. This was possibly because of the rather personal nature of the book, possibly because there is a lot more riding on it than ever before and possibly because my expectations for the project are much higher than perhaps they should be, especially as the first agent I sent it to said he thought it would be a bestseller.

Anyway, whatever the reason, it had the unfortunate effect of really knocking my confidence not just in the material but in all my writing, and even my crafting, as well. Although I immediately talked about what had happened to as many people as possible and picked up some useful advice (the optician was particularly helpful!) it was almost ten days before I was able to look at the material again. By then I had recovered a bit and was able to pick out the parts of the agent's critique which I felt were worth taking on board. Most importantly though, having re-read the material as objectively as I could, I was relieved to discover that despite everything the agent had said, I felt very strongly indeed that I should stick to my guns and that give or take a degree of rewriting, I need to stand by the material.

The whole experience has been an interesting if very challenging one and has reminded me that so much of writing is not really about the writing at all. It's about self-belief, confidence, perseverance, coping with criticism, getting back on the horse and keeping your eye on the bigger picture.

In the words of that well-known writer Adele, "sometimes it lasts...but sometimes it hurts instead."

Back in a couple of weeks, all being well. 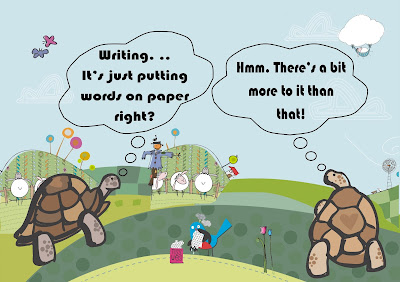 Posted by Melissa Lawrence at 11:48