The Heat Is On

Well, that was a heatwave and a half! Hopefully by now it is on its way out (apologies if you are a sun worshipper) and temperatures will be more conducive to working. Mind you, I can't just blame the heat for a bit of a dip in productivity this week. It probably has as much to do with a certain tennis tournament which is now in full swing, no pun intended.

I did manage to take the damp towel off my forehead and put down my Pimm's for a few minutes this week, to continue the ongoing quest to find an agent to represent my proposed non-fiction book My Dear Elsie. As I've mentioned before, this is the book based on a collection of letters I inherited from my grandmother and which has a very strong link to Downton Abbey.

The agent I approached this week actually invites phone calls for non-fiction book queries, which in itself is pretty amazing, not to mention extremely helpful. As I've said to anyone who will listen, it's easier to get to speak to the Pope than it is to an agent. Anyway, the agent in question has asked to see all my sample copy (the first one to do so) which is an encouraging sign and I await her response with interest.

The other thing I'm pleased about this week is that I've made a decision to go back to writing fiction, something I haven't done for about two years now. Although I have a number of unpublished children's novels which I could work on again, plus one or two ideas for new ones, I thought it would be more sensible to wait until I (hopefully) have acquired an agent who might be helpful in looking at where I am at with my children's books. So it is back to writing short stories again, probably for the women's magazine market as I'm keen to try and boost my tally of published short stories to at least double figures.

I decided that a good starting point was to sort out my rather hefty folder of unpublished short stories, which turned out to be quite an interesting exercise and also meant I could put off actually having to write one for a bit longer. I always think that a good test of how well-written something is comes from re-reading it after a very long period of time. If it feels like someone else has written it, if it makes you laugh (or cry) and if you don't guess your own ending, then that can be a sign that it still has merit. I found one or two stories which fitted into this category and a large number that didn't, as well as a few which I feel could be rewritten as flash fiction.

I also came across a sheet of hints and tips on writing women's magazine fiction which are quite useful and I thought I'd share some of them with you here.

2. Language needs to be simple and straightforward. Sentences should be short and punchy.

4. Don't try to be too literary or too highbrow. (Save that for the small press magazines.)

5. Your lead character should be female and strong, not too wimpy.

6. Tell the story from one character's viewpoint only.

These are pretty basic suggestions but useful if, like me, you are thinking of returning to or trying out the highly competitive world of women's magazine fiction. For more detailed do's and don'ts, plus useful market analysis on where to send your work, I can highly recommend http://www.womagwriter.blogspot.co.uk/

Stay cool, if you can! 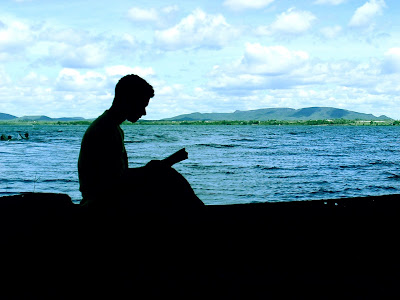 Reading In The Canoe
by Anderson C Sanders Anderson
http://www.publicdomainpictures.net/
Posted by Melissa Lawrence at 15:20